Thai protesters remain on streets for 2nd day, calling for reform in monarchy

Sunday, 20 September 2020_Mass protests continue in the Thai capital Bangkok with thousands of demonstrators taking to the streets with demands for reforms in the monarchy and the resignation of Prime Minister Prayuth Chan-ocha, who came to power in a coup six years ago. 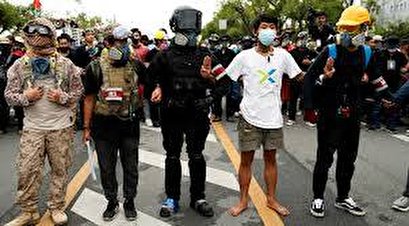 As they promised, demonstrators remained on the streets on the capital overnight into Sunday.

At the biggest demonstration in years, tens of thousands of people gathered in Bangkok on Saturday on the anniversary of the 2006 military coup that overthrew the populist then-prime minister Thaksin Shinawatra.

Shortly after sunrise, protesters cemented a plaque near the Grand Palace in the area known as Sanam Luang, or Royal Field, as chanting, “Down with feudalism, long live the people.”

“At this place the people have expressed their will: that this country belongs to the people and is not the property of the monarch as they have deceived us,” read the plaque.

Police did not intervene in the installation of the plaque and the government spokesman Anucha Burapachaisri ruled out the use of violence against protesters. He said that it was up to the police to determine and prosecute any illegal speech.

Later in the day, protest leaders said that Royal Guard police had agreed to pass on their demands to police headquarters.

“Our greatest victory in the two days is to show that ordinary people like us can send a letter to royals,” Parit “Penguin” Chiwarak, told the crowd of demonstrators.