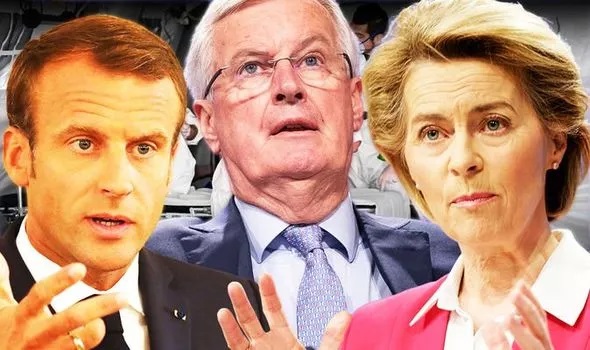 With the row over Boris Johnson's Internal Market Bill still raging after an admission it will breach international law, a Brussels-based expert has suggested the EU's £677 billion EU's coronavirus rescue package may also be illegal.

The legislation, which would override some aspects of the Withdrawal Agreement relating to Northern Ireland, passed its second reading in the House of Commons last week. The EU is threatening legal action unless the bill is withdrawn at the end of the month, with critics seized on Northern Ireland Secretary Brandon Lewis's admission it would break international law if implemented.

However, Pieter Cleppe, a Brussels-based research fellow with the think tank Property Rights Alliance, believes there are also serious questions to be asked about the legality of the bloc's £677billion coronavirus rescue package.

Mr Cleppe was speaking after the European Central Bank's Governing Council confirmed it was continuing its purchases under the pandemic emergency purchase programme (PEPP) with a total envelope of €1,350billion (£1.23billion).

He explained: "The ECB prints money, lends it to banks at artificially low rates, and then buys up government bonds from banks, instead of directly from governments, which would be outright illegal.

"Technically, they claim it's legal, but of course this amounts to printing money to lend it to governments, so it violates the spirit of the ban on monetary financing.

"In a democracy, governments should be financed by parliaments, not by central banks."

The PEPP was launched earlier this year at the height of the coronavirus pandemic in an attempt to keep borrowing costs down and stop the pandemic from turning into a sovereign debt crisis.

The money effectively bankrolls the EU's coronavirus package, which was ratified at the European Council meeting in June after four days of wrangling, with critics in the north of the bloc fearful it would trigger runaway public spending in the south, especially Italy.

Mr Cleppe is not the first to suggest the PEPP scheme exceeds the ECB's mandate.

Last month members of Germany's right-wing AfD party announced it was planning to sue the Bundestag over the PEPP's constitutionality.