Monday, 21 September 2020 _US President Donald Trump mocked a Muslim reporter who was shot with rubber bullet in a peaceful protest, claiming it meant, "law and order." 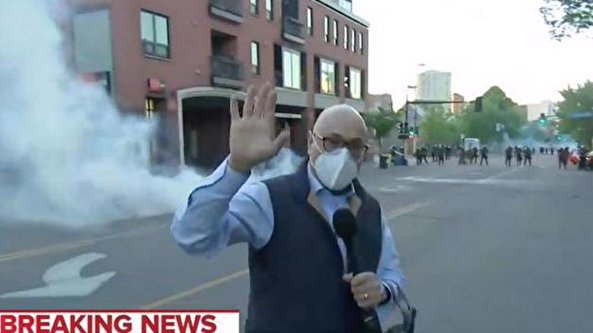 During a political rally in Minnesota on Friday, Trump called the shooting of MSNBC anchor Ali Velshi a "beautiful sight."

"I remember this guy Velshi," Trump said. "He got hit in the knee with a canister of tear gas and he went down. He was down. 'My knee, my knee.' Nobody cared, these guys didn't care, they moved him aside."

Join me TODAY 8-10aET for the 2nd stop of my “Velshi: Across America 2020” tour. I’m in #Kenosha, WI, where the shooting of Jacob Blake sparked protests 3 weeks ago. I’ll hear from local voters, @RepGwenMoore & more on policing, COVID & the Supreme Court. #velshi pic.twitter.com/vOXiMEce1J

Velshi took to Twitter to say that he was actually hit by a rubber bullet, not a tear gas canister.

"And they just walked right through. It was the most beautiful thing," Trump said. "No, because after we take all that crap for weeks and weeks, and you finally see men get up there and go right through them, wasn't it really a beautiful sight? It's called law and order."

'MSNBC journalist Ali Velshi said he was also hit in the leg by a rubber bullet, adding, “State Police supported by National guard fired unprovoked into an entirely peaceful rally.”

The police don't seem to get it. They're digging their hole deeper & forcibly taking us with them https://t.co/wbnwSMG22i

Journalists reporting on nationwide protests against police brutality and racial injustice have increasingly been targeted by US law enforcement.