Monday, 21 September 2020 _Pakistan’s major opposition parties have joined hands to establish a new alliance aimed at ousting the government of Prime Minister Imran Khan. They also called for transparent elections and electoral reforms in the country. 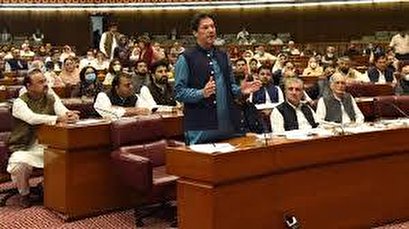 This is a mega gathering of top leaders from Pakistan’s mainstream opposition parties in the capital Islamabad. After hours of discussion, they announced a united alliance ---Pakistan Democratic Movement--- aimed at organizing country-wide street rallies to compel Prime Minister Imran Khan to resign and hold fresh general elections.

The opposition parties are set to begin their campaign in early next month and intensify the agitation in January next year. They believe that the current government is by-product of what they call rigged 2018’s general elections and hence it must resign before the mass agitation reaches its climax.

The country’s powerful military has been at the heart of allegations to have rigged the general elections in favor of Prime Minister Khan’s ruling party. In an obvious reference to the military, the former Prime Nawaz Sharif in video link from London, vowed to struggle against it for rigging general elections.

In a declaration, the opposition groups also strongly condemned the government's internal and foreign policies saying the policies have put the country in deep troubles.

The government, on the other side, dismissed the gathering as a meeting of corrupt figures and vowed not to bow to the opposition pressure.