Monday, 21 September 2020 _The presidents of Venezuela and Argentina have joined a growing chorus of voices calling for an end to the prosecution of WikiLeaks founder Julian Assange, who is currently fighting extradition to the United States at a British court. 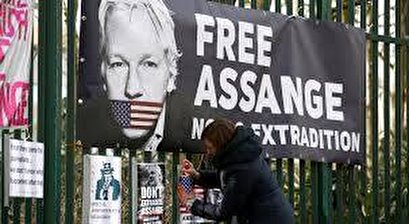 Argentinian President Alberto Fernández and his Venezuelan counterpart Nicolas Maduro singed an open letter, along with a group of over 167 former presidents , ministers, heads of state and parliamentarians, decrying Assange’s prosecution as violating "the right to freedom of expression, freedom of the press and the right to know.”

The Australian-born journalist faces charges of espionage for having published vast troves of US military records and diplomatic cables ten years ago.

The letter described the 17 Espionage Act charges against the Australian journalist as violating "the right to freedom of expression, freedom of the press and the right to know.”

“The broad and vague nature of the allegations against Julian Assange, and of the offenses listed in the indictment, are troubling as many of them concern activities at the core of investigative journalism in Europe and beyond,” read the letter.

“Extradition on the basis of the indictment would gravely endanger freedom of the press,” it added.

The letter also said that Assange has been "denied time and facilities to prepare his defense in violation of the principle of equality of arms which is inherent to the presumption of innocence and the rule of law.”

It referred to findings by UN torture expert Nils Melzer, who said that Assange showed clear signs of psychological torture.

Brazils’ former leader, Lula, called for “the democrats of the planet Earth, including all journalists, all lawyers, all unionists and all politicians,” to voice their support for Assange.

Australian lawmaker Andrew Wilkie, who has also signed the letter, said “Assange is being politically persecuted for publishing information that was in the public interest, including hard evidence of US war crimes.”

“That the perpetrator of those war crimes, America, is now seeking to extradite Mr Assange is unjust in the extreme and arguably illegal under British law,” he said.

If extradited, he warned, Assange would face 175 years in prison, and that “the precedent would be set for all Australians, and particularly journalists, that they are at risk of being extradited to any country they offend."

Assange’s legal challenge in the UK started a decade ago, when he began fighting an attempt to extradite him to Sweden over allegations of sexual assault. Those charges, however, were later dropped.