US in tatters from within, isolated overseas: IRGC chief

Tuesday, 22 September 2020 _The United States has fallen apart from within while becoming increasingly isolated on the outside, says the commander-in-chief of the Islamic Revolution Guards Corps (IRGC). 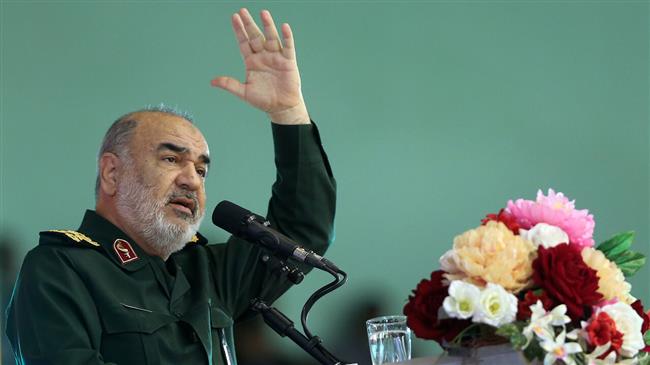 General Hossein Salami was speaking on the sidelines of an event held in the capital Tehran to honor one million veterans of the country’s 1980-88 defense against the invasion led by former Iraqi dictator Saddam Hussein.

“The United States has fallen to pieces from within and is becoming increasingly isolated on the outside,” Salami said.

“The dignified Iranian nation should not have any worries, and must live in tranquility,” he added.

The IRGC chief said, “The United States has lost its own symbols and even the people of the country are now saying ‘death to the United States,’ knocking down symbolic statues and burning the American flag.”

The United States has been the scene of widespread demonstrations in condemnation of police violence and racial injustice against people of color since the brutal murder of African American George Floyd in late May, when a white police officer knelt on his neck for over eight minutes in Minneapolis, Minnesota.

The killing has revived the debate about race relations in America and prompted minority groups across the country to vent their long-felt indignation about systemic racism, also breathing new life into the ‘Black Lives Matter’ movement.

In some American cities, protesters have pulled down or defaced statues and monuments of historical figures, such as the Confederate leaders, who backed slavery.

Share to
Related News
IRGC Chief: The US has not given up on its expansionist strategy/ Iran keeps getting stronger every day
Tags
IRGC chief ، tatters ، united states
Your Comment