Wednesday, 23 September 2020 _US President Donald Trump has attacked Muslim congresswoman Ilhan Omar over telling him "how to run our country." 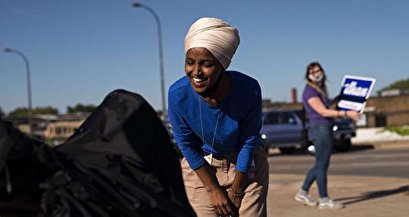 His Tuesday comments marked the latest personal attacks he has levied against Omar, who arrived in the United States with her family after fleeing war-ravaged Somalia.

"We’re going win the state of Minnesota because of her, they say," the president said. "She’s telling us how to run our country. How did you do where you came from? How is your country doing?"

Trump also attacked Representative Alexandria Ocasio-Cortez, another member of a group of progressive congresswomen known as The Squad, saying she is "not a good student" or a "good anything, but she’s got a good line of crap."

"We don’t need socialists and we don’t need communists telling us how to run our country," Trump said.