Wednesday, 23 September 2020 _The naval fleet of the Islamic Revolution Guards Corps (IRGC) has received 188 combat drones and helicopters manufactured by experts at the country’s aviation industry. 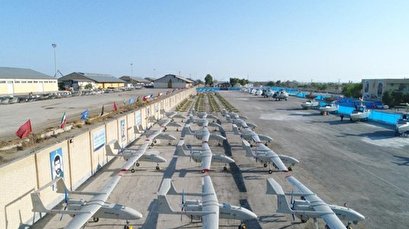 Speaking during a ceremony in southern port city of Bandar Abbas on Wednesday, IRGC Navy Commander Rear Admiral Alireza Tangsiri said the drones are capable of capturing videos and photographs in the battlefield to help with the acquisition of moving and stationary targets at sea.

He said the unmanned aerial vehicles (UAVs) can be used to monitor all maritime movements.

Tangsiri also said three of the drones, namely vertically-launched Sepeher, Shahab-2 and Hodhod-4, have been unveiled for the first. The sea-launched drones can be used for reconnaissance missions.

Mohajer drone, which was likewise among the UAVs joining the IRGC naval fleet, has a flight range of more than 200 kilometers and can carry four missiles in all weather conditions, the commander noted.

Share to
Related News
IRGC Chief: The US has not given up on its expansionist strategy/ Iran keeps getting stronger every day
Tags
industry ، drones ، IRGC
Your Comment