Tehran, YJC. John Kerry insists any US moves in Iraq will not involve combat troops 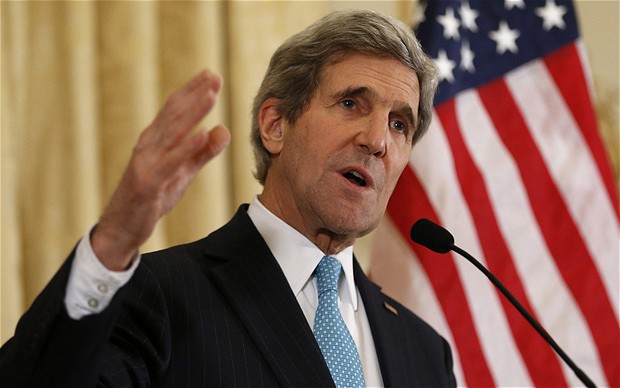 US combat forces will not re-enter Iraq, John Kerry insists, but the US says it will explore more "political, economic and security options” as the country transitions out of political deadlock with a new prime minister.
During a visit to Australia for the annual Ausmin talks, the secretary of state told reporters the US government congratulated Haider al-Abadi on his nomination, and he urged the incoming prime minister to form a new, inclusive and functional cabinet "as swiftly as possible”.
With Nouri al-Maliki effectively deposed overnight by Iraq’s president in favour of the rival Shia candidate, Kerry said the Obama administration stood ready to "fully support a new and inclusive Iraqi government”.
Kerry said the government in Iraq needed to create circumstances where the "forces of Iraq are not a personal force defined by one particular sect and sworn to allegiance to one particular leader, but .. truly represent Iraq”. With a new "inclusive, participatory” government in Baghdad, the US would "absolutely look to provide additional options” to help stabilise the country.
Kerry made it clear this did not mean a return of US combat troops.
"There will be no reintroduction of American combat forces into Iraq,” he said. "Nobody, I think, is looking forwards to a return to the road that we’ve travelled.
"What we’re really looking for here is a way to support Iraq, support their forces with either training or equipment or assistance of one kind or another, that can help them to stand on their own two feet and defend their nation.
"That’s the goal. That’s where the conversation begins.”
Having failed on Monday to rule out supporting the US if Washington muscled up militarily in Iraq, Australia’s defence minister, David Johnston, made it clear on Tuesday that any Australian involvement would be confined to providing humanitarian assistance through air drops around the Kurdish city of Irbil.
"That’s the role that we will carry out,” Johnston said. "We’ll fit into and be part of the planning of the United States and other partners who want to assist on that humanitarian basis. That’s the way we’ll go forward.”
Australia’s opposition leader, Bill Shorten, had argued on Tuesday there was no case for Australian forces to return to Iraq. Shorten, in public remarks before a meeting with Kerry late on Tuesday local time, highlighted Labor’s "principled stand” against the 2003 invasion.
The Ausmin talks – a regular gathering of foreign and defence ministers from Australia and the US – also resolved to take a joint proposal to the United Nations to combat the domestic security threats posed by returning jihadists from the sectarian conflicts in the Middle East.
The Australian government has announced it will bring forward a package of legislative changes designed to make it easier to prosecute Australian-born fighters taking part in terrorist acts overseas.
The Coalition is yet to produce legislation, or fully fleshed out proposals, but in principle the changes would include a reversed onus of proof. The government has indicated that any Australians returning from designated regions – such as Iraq and Syria – will have to prove they were in the region for a legitimate purpose.
The meeting of US and Australian officials in Sydney included a lengthy discussion about foreign fighters, and a resolution that the US and Australia take a "best practice” proposal to the UN.
"We have a responsibility to take this to the United Nations and to the world so that all countries involved take measures ahead of time to prevent the return of these fighters and the chaos and havoc that could come with that,” Kerry said on Tuesday.
Australia’s foreign minister, Julie Bishop, said if the international community could "exchange ideas and practices and suggestions as to how we can deal with it, then I think we will have made a great step forward”.
"And so we certainly will support the United States and work very hard to ensure that we collectively deal with this growing threat to the security of our nation,” Bishop said.
The Guardian
Share to
Tags
usa ، kerry ، military ، iraq
Your Comment