Wednesday, 23 September 2020 _The majority of a 470-strong pod of pilot whales found stranded off Australia's remote southern coast has died, officials said on Wednesday, as rescuers struggled in freezing waters and fading light to free those still alive. 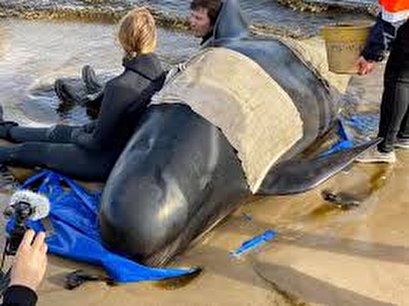 The group, which is the biggest beaching in the country's modern history, were first spotted a wide sandbank during an aerial reconnaissance of rugged Macquarie Harbour in Tasmania state on Monday.

After two days of a difficult and dangerous rescue attempt, state marine scientists said at least 380 of the long-finned pilot whales had died.

By late Wednesday, around fifty of the mammals were freed but experts said there was a high likelihood they would return as many did during the rescue attempt a day earlier, creating an exhausting loop for rescuers who cannot work through the night.

The outlook for the remaining 30 stranded and still alive pilot whales, a species of oceanic dolphin that grow to 7 metres (23 ft) long and can weigh up to 3 tonnes, was bleak.

"As time goes on, they do become fatigued and their chance of survival reduces," Nic Deka, Parks and Wildlife Service incident controller said. "We do expect to rescue more but increasingly our focus is what do with the carcasses."