Wednesday, 23 September 2020_Brazil’s far-right President Jair Bolsonaro has blamed indigenous people for the catastrophic fires that have raged through the Amazon region’s rain forest, and rebutted international criticism of his handling of the coronavirus epidemic. 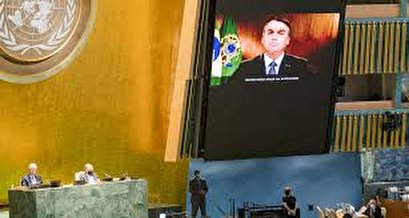 Bolsonaro defended his controversial environmental policies in a pre-recorded speech to a remote session opening the United Nations General Assembly on Tuesday.

Devastating wildfires have returned to the Amazon a year after they caused global outrage and prompted the international community to blame Bolsonaro’s policies for the catastrophe. The region is now experiencing its worst rash of fires in 10 years, and the Pantanal wetlands, the world’s largest, are experiencing the most blazes ever recorded.

Bolsonaro blamed the native peoples of the land instead.

“The fires practically occur in the same places, on the east side of the forest, where peasants and Indians burn their fields in already deforested areas,” he said.

Bolsonaro asserted that humidity prevents fire from spreading to rainforests.

This is while experts say ranchers use fires to clear newly deforested land for pasture, which in dry years can burn into woodland.

The head of Brazil’s main indigenous umbrella organization, Sonia Guajajara, said in response that Bolsonaro was lying to the world.

“We must denounce this political catastrophe that destroys the environment and our future,” the indigenous leader said.

Experts say the wildfires are likely to continue until October.