Ghalibaf makes his remarks about Gen. Soleimani on the occasion of the commemoration of the Holy Defense Week 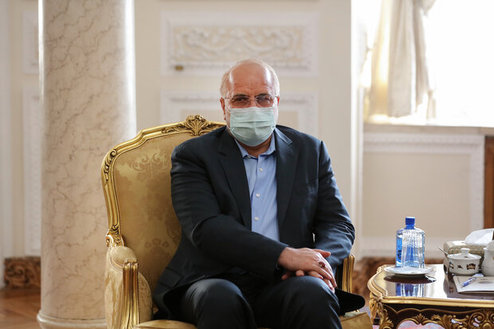 Hailing Lt. General Soleimani’s sacrifices in defending the country against the enemy, the Iranian Parliament Speaker, Mohamad Bagher Ghalibaf, noted that the first and foremost result of the martyrdom of General Soleimani was bringing down the US grandeur in the world.

Speaking in an IRIB TV program on the occasion of the commemoration of the Holy Defense Week, the Iranian Parliament Speaker referred to the significant role of the Lieutenant-General Ghasem Soleimani during the war days in defending the Iranian nation against the enemy.

Describing him as one the influential commanders of the Imposed War, Ghalibaf said that, even after the imposed war, General Soleimani also dedicated most decades of his life in defending the borders of the country against terrorist groups.

Referring to the repeated failures of global arrogance in West Asia, he said, “General Soleimani defeated the United States in the Persian Gulf region for about 20 years."

Ghalibaf also spoke about the martyrdom of General Soleimani who lived his life gloriously and morally and his martyrdom brought about important development and changed the equations in West Asia.

“Also, the martyrdom of General Soleimani brought down the grandeur of the United States at the international level, and in the second phase of Islamic Revolution it will eradicate any westernizations in the country”, Ghalibaf added.

Martyr Qasem Soleimani was assassinated in a targeted US drone strike on January 3, 2020, in Baghdad, which was approved by US President Donald Trump. The strike was strongly condemned by many, including the Iranian government, and a multi-city funeral was held in Iraq and Iran for the general and his companions.

Share to
Related News
Iranian Government Spokesman: Trump is more violent and brutal than Saddam
Supreme Leader of Iran: Passage of Time is not able to efface the memory of Martyrs from the Iranian Nation
President Rouhani: US Can Impose Neither Negotiations, Nor War on Iran
To al-Kaabi the US the number one enemy; he seeks revenge for Gen. Soleymani’s martyrdom
IRGC chief: Iran's revenge 'definite', but to target those behind assassination
South Africa says ‘surprised’ by ‘bizarre’ report of Iran plot to kill US envoy
Tags
general soleimani ، usa ، parliament speaker
Your Comment