Iran’s IRGC opens new naval base at Strait of Hormuz

Thursday, 24 September 2020_The Islamic Revolution Guards Corps (IRGC) has opened a new naval base at Sirik, a coastal Iranian town east of the strategic Strait of Hormuz in the Persian Gulf. 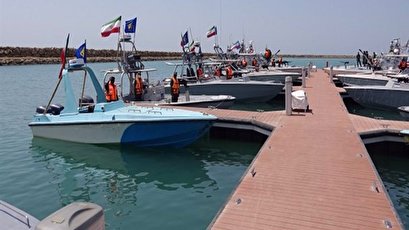 The new base, named after Martyr Rahbari, was launched in a Wednesday ceremony attended by IRGC Chief Commander Major General Hossein Salami.

The base, whose construction started six years ago, has been built in an area of 31 hectares with the aim of giving the country full control over the arrival and departure of ultra-regional vessels in the Persian Gulf, Strait of Hormuz, and the Sea of Oman.

Addressing the opening ceremony, General Salami said the naval base has been built in the country’s most strategic region, and serves both defensive and offensive purposes in the strategic region of Persian Gulf and Strait of Hormuz.

Share to
Related News
Iranian Deputy Foreign Minister: Iran any foreign actor’s presence in Persian Gulf
Supreme Leader of Iran: Passage of Time is not able to efface the memory of Martyrs from the Iranian Nation
Tags
Hormuz ، IRGC ، naval
Your Comment