Thursday, 24 September 2020_An international rights organization has cast doubt on the integrity of the upcoming general elections in Myanmar, as tens of thousands of minorities in the Buddhist-majority country remain without the right to vote. 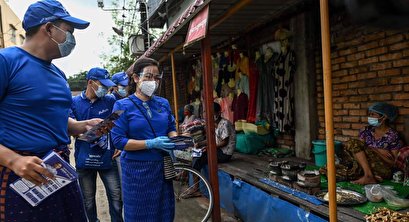 The International Commission of Jurists (ICJ) said in a statement on Wednesday that the situation in Myanmar raised questions about the integrity of the elections set for November, as access to information has been hampered due to internet restrictions and the coronavirus lockdown.

“Stay-at-home orders have compelled voters and electoral candidates to rely on social media for political campaigning,” it said. But slow connectivity to the internet in conflict-hit areas “significantly limits online engagement of affected communities,” it added.

The ICJ further called on the United Nations (UN)’s special rapporteur on human rights in Myanmar to “safeguard the integrity” of the poll and ensure that political rights are respected in the country.

The rights group also called on Myanmar’s electoral body to consider “appropriate alternatives” to in-person voting to avoid voters risking their health amid the pandemic.

On Tuesday, UN human rights investigator for Myanmar Thomas Andrews said the upcoming elections would fail to meet international standards because of the disenfranchisement of hundreds of thousands of Rohingya Muslims.

He said the polls could not be free and fair because of the exclusion of Rohingya of voting age living in the western Rakhine State and in refugee camps in neighboring Bangladesh.

“The results of an election cannot accurately reflect the will of the people when the right to vote is denied because of a person’s race, ethnicity, or religion,” he said in an address to the UN Human Rights Council in Geneva.

“And, I have seen no evidence that the government is willing or prepared to facilitate the right to vote for hundreds of thousands of voting age Rohingya located in Rakhine State or in refugee camps in Bangladesh,” he added.

Back in August, authorities in Myanmar disqualified six Rohingya politicians from contesting the general elections for the lack of ID documents.