Thursday, 24 September 2020_Fresh US anti-racism protests have erupted in several cities, when no charges were filed against policeman involved in the fatal shooting of black woman Breonna Taylor in Louisville, Kentucky, in March. 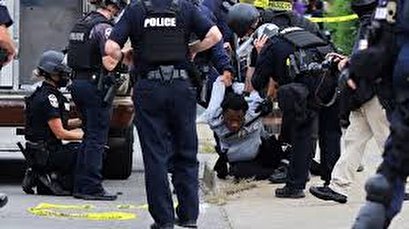 Kentucky Attorney General Daniel Cameron said the panel had declined to bring any charges whatsoever against two of the three white policemen who fired into Taylor’s apartment on March 13. Cameron announced that the officers involved in the fatal shooting would not face charges for her death. Instead, only one of the officers was charged for “wanton endangerment”.

Following the grand jury ruling, which was decried by civil rights activists as a miscarriage of justice, protesters immediately took to the streets of Louisville, Kentucky’s largest city, and chanted, “No lives matter until Black lives matter.”

Taylor, 26, an aspiring nurse, was killed in front of her armed boyfriend after the three officers forced their way into her home with a search warrant in a drug trafficking investigation.

Her death became a symbol during months of daily protests against police brutality and racial injustice and in cities across the United States.

The officers' injuries were "not life-threatening" and "both officers are undergoing treatment," Schroeder added.

Police arrested scores of people after clashes with protesters near downtown Louisville.

Anti-racism protests were also held in other cities on Wednesday, including New York, Washington, Atlanta, Chicago, and Philadelphia.

The outcome of the grand jury probe has sparked angry reactions, with Benjamin Crump, a prominent civil rights lawyer representing the Taylor family, denouncing the ruling, saying it was “outrageous” that none of the three officers involved in the raid was criminally charged with causing Taylor’s death.

Attorney General Cameron said, “There is no doubt that this is a gut-wrenching, emotional case.”

Kentucky Governor Andy Beshear said, “Those feeling frustration, hurt - they deserve to know more,” calling for the release of all evidence from the investigation to benefit the public’s understanding of the case.

Mayor Greg Fischer said, “It’s clear that there are policies and procedures that needed to be changed, because Breonna Taylor should still be alive,” he said. “Let’s turn to each other, not on each other, at this moment of opportunity.

The Trump administration is already under fire after sending federal forces to cities, including Portland, Oregon, amid a wave of anti-racism protests this summer after the killing of unarmed black man George Floyd in by a white police in Minneapolis, Minnesota, on May 25. Floyd’s death sparked Black Lives Matter protests across the US and globally.