In yet another indication of police brutality against protesters in the United States, an American police officer has been captured on video riding his bicycle over the head of an anti-racism demonstrator in the US city of Seattle, Washington. 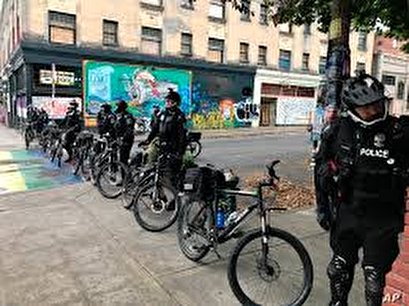 The video of the incident went viral in the early hours of Thursday, showing a Seattle police officer rolling the front and rear tires of his bicycle over a protester's head and neck area as the man was lying on the ground in downtown Seattle.

Then we see officers swarm the protester, identified as Camillo Massagli, who was said to have been arrested for what the police claimed was obstruction of a public thoroughfare and failure to disperse.

“This was not an accident, you can see very intentionally the officer very deliberately take his bike and run over,” said a witness, named Joey Wieser, who recorded a 35 second video of the incident.

It remains unclear if the man was seriously injured since he was wearing a helmet.

The Seattle Police Department said in a statement that the officer has been placed on administrative leave and his actions are being investigated as more than 30 complaints have been received about this violent incident.

The video and subsequent outrage comes as tensions rise between protesters against systemic racism by police officers, after the Kentucky attorney general announced on Wednesday a decision not to bring homicide charges against officers involved in the fatal shooting of Breonna Taylor.