riday, 25 September 2020 _Iran's Judiciary chief Ebrahim Raeisi has said that individuals behind money laundering, economic corruption and instability in the country will have nowhere to flee according to the country's Islamic governance values. 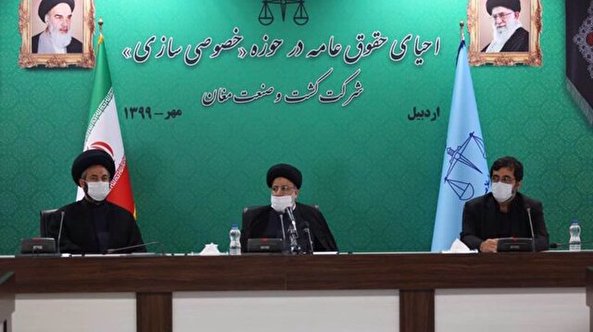 Raeisi made the remarks concluding his tour of judicial institutions in Iran’s northwestern Ardabil province on Thursday.

“Economic corruption exists in all areas, including the executive, financial and banking sectors. This is clear when the high number of judicial cases is taken into account: it shows we are facing reoccurring cases of corruption,” he said.

He added that reforming governance structures which may lead to corruption are among the most important responsibilities of the parliament and the government.

Raeisi said it is imperative for the judiciary to crack down on economic corruption as “people’s current living conditions are influenced by such malicious practices”.

“Today, it is the responsibility of all authorities to strive for the advancement of national production. Words are not enough to accomplish such; all these words need to be turned into action,” he said.

Raeisi pointed that the judiciary has been able to help 1,200 factories and workshops recover from economic stagnation as part of its initiative to counter legal hurdles impacting production in the past year.

“The emphasis of the Leader of the Islamic Revolution is to facilitate national production, remove barriers hampering employment and the creation of more jobs,” he said, adding that "the voices of employers, entrepreneurs and workers must be heard”.

He added that illegal land seizures and legal disputes related to the province’s Moghan agricultural and industrial area were among the most important identified issues.

He said that a board of jurists was to be immediately formed in order to make a final decision in regards to the agricultural and industrial area.

Earlier this month, Raeisi thanked Leader of the Islamic Revolution Ayatollah Seyyed Ali Khamenei for agreeing to extend the mandate of special tribunals set up to try economic corruption cases.