Trump’s New Baseless Claim: I can only lose election if ‘Democrats cheat’

Saturday, 26 September 2020 (YJC)_ US president baselessly claims he can only lose election if ‘Democrats cheat’. 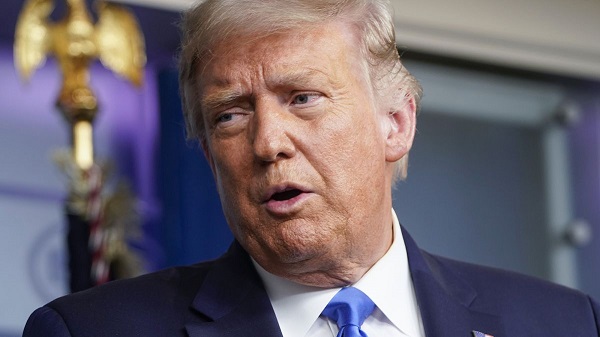 The US president, Donald Trump has asserted baselessly - and falsely - that he can only lose the presidential election in November if Democrats “cheat” him out of victory.

The claim is countered by virtually all national polling, which shows Mr Trump trailing in a majority of swing states to former vice-president Joe Biden, the Democratic nominee for president.

Mr Trump’s escalating attempts to sow doubt about the outcome of the vote came as a number of US news outlets reported he had settled on his Supreme Court nominee to fill the vacancy left by the death of Ruth Bader Ginsburg last week.

Amy Coney Barrett, a favoured candidate among conservatives, is expected to be officially announced by Mr Trump later today.

Share to
Related News
Ankara lashes out at Pelosi for suggesting Turkey not democratic
Iran not buckling under to Trump's madman theory threats
Biden says Trump will leave White House if he loses reelection bid
Pompeo: Chinese Consulate in NYC is another location for espionage
Tags
donald trump ، usa ، presidential election
Your Comment