Sunday, 27 September 2020_Hundred of supporters of the far-right Proud Boys group from across the US have converged in the western city of Portland for a pro-Trump rally as police prepared for clashes with rival anti-fascist protesters in a city that has emerged as the epicenter of political violence ahead of the November polls. 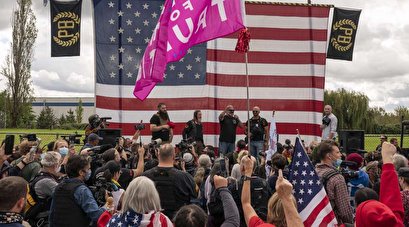 The Saturday development came a day after State of Oregon Governor Kate Brown declared a weekend state of emergency for the state’s largest city, pointing out that “white supremacist groups” were traveling from out of state to take part in an event the radical right-wing group boasts as a bid to “end domestic terrorism” in the US following months of nationwide protests against police brutality and racism after the police killing of African-American George Floyd in Minneapolis in June.

“I am incredibly concerned about the increased risk of violence in Portland this weekend,” Brown told reporters.

This is while city and state leaders released a letter to the community, insisting that many participants in the Proud Boys rally have openly discussed tactical operations and military-style formations during the event and were plotting to incite chaos and violence under the pretext of supporting police forces.

“The event poses a physical danger to Portland residents, as clearly shown by the organizers’ long track record of assaults, confrontations, and threats against elected officials and the citizenry of Portland,” the letter underlined.

“We clearly state, once again, that law enforcement do not want or need any help from paramilitaries or vigilante groups,” it further emphasized.

The Proud Boys planned to gather at Portland’s Delta Park, nearly six miles north of downtown while anti-racist groups were planning to hold rival rallies about two miles away. Police authorities said they intend to keep the two groups apart.

While thousands were expected to participate in the right-wing rally, latest reports indicate that much fewer people showed up for the event on Saturday.

The men-only Proud Boys group claims to be a fraternal organization that is “anti-racism” and “anti-political correctness.”

“Saturday’s rally is the latest in a long series of sustained provocations that the Proud Boys have held in Portland,” SPLC research analyst Cassie Miller said in a Friday statement.

The group has publicized its Saturday event on Facebook for weeks, despite the social network’s pledge to block such pages, according to images released by the Tech Transparency Project.

Moreover, Facebook, along with other online platforms such as Parler, have buzzed with calls for protesters to arm themselves and wild talk of civil war, according to pages monitored by Reuters news agency.