Monday, 28 September 2020_Heavy fighting continues in the South Caucasus region of Nagorno-Karabakh, a day after a decades-long territorial dispute re-erupted with the heaviest clashes in years between Azerbaijan’s military and Armenian-backed forces. 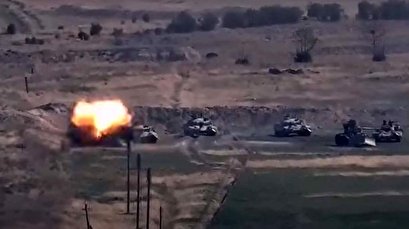 Fighting was reported throughout the night into early Monday morning, with both sides deploying heavy artillery.

The latest flare-up of violence has resulted in scores of fatalities and injuries on both sides.

Azerbaijan's foreign minister said on Monday that six Azeri civilians had lost their lives and 19 others sustained injuries in the latest bout of fighting.

The Azerbaijani Prosecutor General's Office reported that "as many as 26 civilians have been hospitalized with various bodily injuries."

Both sides have accused each other of continuing to attack the other with heavy artillery.

The major escalation has concerned the international community and prompted calls for calm in the region.

On Monday, Russia's Foreign Ministry called on all sides to show restraint.

China’s Foreign Ministry also called for restraint on Monday, saying that Beijing hoped Yerevan and Baku could resolve their differences through dialog. Ministry spokesman Wang Wenbin said that maintaining regional peace and stability was in the interests of all parties.

Turkey and Russia immediately reacted to the escalation on Sunday, calling on both sides to cease fire and start negotiations.

Turkey, an Azerbaijan ally, accused Armenia of the flare-up and promised Azerbaijan its “full support.”

Russia, on the other hand, which maintains close ties with Armenia, called for “an end to hostilities.”

“The Russian side expressed serious concern over the resumption of large-scale clashes,” said President Vladimir Putin.