Protesters in London condemn US meddling in Iraq

Monday, 28 September 2020_A group of protesters have gathered outside the Iraqi embassy in London to condemn the United States’ meddling in the Arab country’s internal affairs. 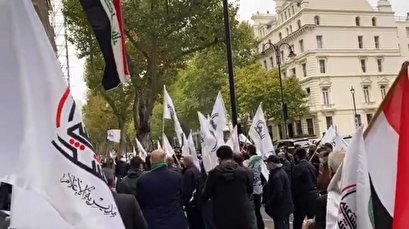 US is the Great Evil”

—The protests come as the US is reportedly evacuating its staff from the American embassy in Baghdad as part of a plan to close the embassy.

The US has reportedly said it is shutting down its embassy in Baghdad unless Iraq prevents rocket attacks.

“What we’re being told is that it is a gradual closure of the embassy over two to three months,” an Iraqi official was cited as saying in a Wall Street Journal report.