Tuesday, 29 September 2020_A video clip has gone viral on social media showing an Iraqi pilgrim repeatedly kissing and expressing affection toward a poster of Iranian Lieutenant General Qassem Soleimani and Iraqi General Abu-Mahdi al-Muhandis, who were assassinated in a terrorist operation ordered by US President Donald Trump. 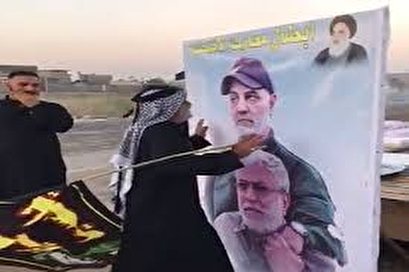 The footage was taken during the nearly 90-kilometer walk from the holy city of Najaf to Karbala to observe the anniversary of the 40th day (Arbaeen) of the martyrdom of Imam Hussein (PBUH), the grandson of Islam’s Prophet Muhammad (PBUH) and the third Shia Imam — by forces of a tyrant named Yazid nearly 1,400 years ago.

Over the years, participants in what has become known as the annual “peace march” to Karbala have come from all over the globe and their numbers reached over 20 million people in their bid to pay their respects to Imam Hussein for his stance against the tyrant caliph of the time and in defense of the Islamic principles of peace and respect for free thinking.

This year, however, the Iraqi government has closed its borders to foreign pilgrims due to the coronavirus pandemic. The pilgrimage ritual is taking place with only Iraqi participants this year as a result, with the pilgrims observing health advisories issued by local authorities.

The US military assassinated General Soleimani, the commander of the Quds Force of the Islamic Revolution Guards Corps (IRGC), along with Abu Mahdi al-Muhandis, the deputy head of Iraq’s Hashd al-Sha’abi, and their companions by targeting their vehicles with missiles outside Baghdad International Airport on January 3.

The act of terror was carried out by the American military on the order of Trump.

General Soleimani was a key figure in defeating Daesh, the world’s most notorious terrorist group, in Middle East battles.