Wednesday, 30 September 2020_The United Nations Security Council has called for an immediate halt to the fighting between Armenia and Azerbaijan, and a return to constructive talks over the disputed Nagorno-Karabakh region. 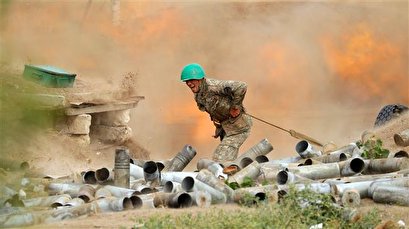 In a Tuesday statement adopted unanimously during emergency talks on the conflict, the Council said its 15 members had "voiced support for the call by the Secretary General on the sides to immediately stop fighting, de-escalate tensions and return to meaningful negotiations without delay."

The Council members said they "strongly condemn the use of force and regret the loss of life and the toll on the civilian population" in the Nagorno-Karabakh region, which broke from Azerbaijan in the 1990s.

The 15-member body also underlined its "full support" for the central role of the co-chairs of the Organization for Security and Cooperation in Europe's Minsk Group — the US, Russia and France — who have mediated peace efforts but their last big push for a peace deal collapsed in 2010.

Azerbaijani and Armenian forces battled for a third day on Tuesday after dozens were killed in an outbreak of heavy fighting.

Heavy clashes erupted on Sunday between Azerbaijani and Armenian military forces over the disputed Nagorno-Karabakh region, a territory which is internationally recognized as part of Azerbaijan, but has an Armenian population.

Scores have been killed and hundreds wounded in the worst spate of fighting between the two former Soviet republics since the 1990s.

Both sides blame each other for initiating the fighting in the Caucasus Mountains.

Baku said 12 civilians were killed and dozens more wounded in the Armenian shelling of a border city. Yerevan denied the shelling and accused Azeri forces of targeting a civilian bus and hitting a military unit in a town far from the conflict zone.

Earlier on Tuesday, the Armenian Defense Ministry said one of its warplanes had been shot down by a Turkish fighter jet over the Armenian airspace, a claim denied by Ankara.