Wednesday, 30 September 2020_US President Donald Trump’s nominee to the Supreme Court is said to have represented the Mujahedin Khalq Organization (MKO) terror group in a case pursing the removal of the notorious anti-Iran cult from the State Department’s list of designated foreign terrorist organizations. 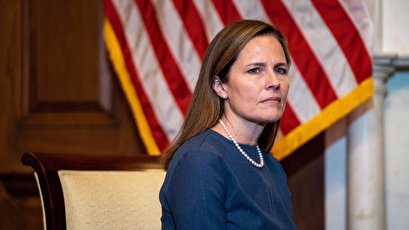 The Washington Post reported on Wednesday that Judge Amy Coney Barrett disclosed her legal work for the MKO in the Senate questionnaire she submitted during her 2017 confirmation process to join the US Court of Appeals for the 7th Circuit.

In her questionnaire, Barrett wrote that she was one of five lawyers on a team that worked for the terror group and its US representative office from 2000 to 2001 in their petition to review the State Department’s foreign-terrorist-organization designation.

She also explained that she had “assisted with legal research and briefing” for the MKO’s case while she worked for Miller, Cassidy, Larroca & Lewin LLP, a law firm in Washington that merged with Baker Botts LLP in 2001 during her employment there.

The MKO has conducted numerous assassinations and bombings against Iranian statesmen and civilians since the 1979 victory of Iran’s Islamic Revolution. Its members fled Iran in 1986 for Iraq, where they enjoyed backing from former Iraqi dictator Saddam Hussein.