I don't know who the Proud Boys are, Trump says after encouraging racist group in debate

Thursday, 01 October 2020 _Amid backlash over failure to condemn White supremacy in America, President Donald Trump appears to be attempting to fix it be denying the Proud Boys, a racist group he cheered in the first debate with Democratic nominee Joe Biden. 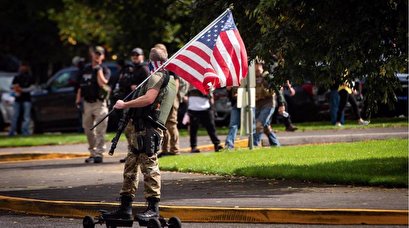 "I don't know who the Proud Boys are," Trump told reporters when departing for a campaign trip to Minnesota. "I can only say they have to stand down. Let law enforcement do their work."

In the debate, the president also asked the far-right group to "stand by," referencing their role in cracking down on antifa.

"But... Joe Biden has to say something about antifa," he said, refusing to denounce white supremacists supporting him again.

The Proud Boys celebrated Tuesday night after Trump mentioned them during the first presidential debate, fashioning his remarks into a logo.