Azerbaijan vows to fight until Armenia’s ‘full withdrawal’ from Karabakh 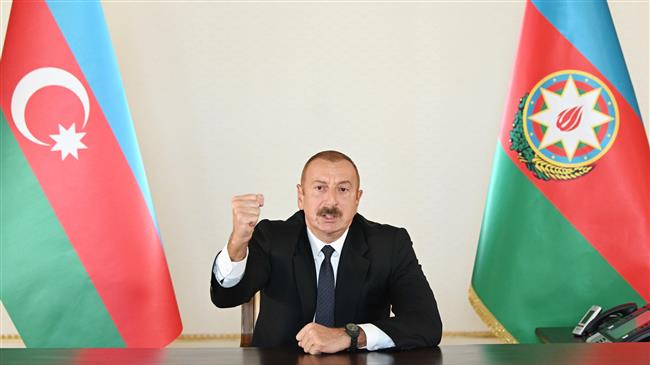 “We only have one condition: Armenian armed forces must unconditionally, fully, and immediately leave our lands,” Aliyev said on Wednesday, adding that, if “the Armenian government fulfills the demand, fighting and bloodshed will end, and peace will be established in the region.”

The statement was made on the fourth day of fighting between Azerbaijan’s military and Armenian-backed forces over Nagorno-Karabakh, the heaviest in years.

Scores of deaths have been reported in the fighting over the past days, with Yerevan and Baku continuing to accuse one another of being responsible for the war.

The disputed region of Karabakh is internationally recognized as part of Azerbaijan but has an Armenian population and administration. The two countries have been locked in the territorial dispute since the 1990s, when Karabakh declared independence after a war that claimed 30,000 lives.

The new round of fighting is the heaviest since a 1994 ceasefire, which nevertheless failed to put an ultimate end to the conflict.

World leaders have urged a halt to the fighting, which has raised the specter of an all-out war between the two ex-Soviet Republics.

The Azerbaijani president has ruled out any possibility of talks. So has Armenian Prime Minister Nikol Pashinyan.