Protests rumble in India over alleged gang-rape of young woman

Saturday, 03 October 2020_Galvanized by the alleged gang-rape of a young woman who died of her injuries earlier this week, political parties representing India’s downtrodden Dalit community held protests in several cities on Friday. 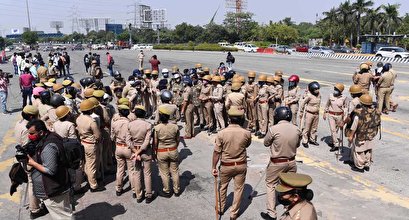 In Lucknow, the capital of Uttar Pradesh, the state where the crime took place, police baton-charged more than 100 activists from the Samajwadi Party, who held placards demanding justice for the dead woman.

The chief minister of Delhi, Arvind Kejriwal, also joined the protest attended by around 3,000 people, including political party workers and non-profit organisations representing the Dalit community.

“The whole country would like to appeal to the Uttar Pradesh government that the culprits be given stringent punishment and must be hanged till death,” Kejriwal said.

The family of the dead woman has accused four high caste Hindu men, who have been arrested but not charged by police. Caste still plays an influential role in the politics of Uttar Pradesh, where the current state government is led by Prime Minister Narendra Modi’s Bharatiya Janata Party.

Dalits, once known as “untouchables”, are at the bottom of the social hierarchy.

The 19-year-old victim, who was allegedly attacked on Sept. 14 in a field near her home in Hathras district in Uttar Pradesh, died on Tuesday. The incident sparked nationwide protests.

While the family say the woman died as the result of a brutal sexual assault, senior state police officer Prashant Kumar told ANI News on Thursday the woman died due to a neck injury. “No sperm was found in samples,” said Kumar.

Bhuri Singh, the uncle of the victim, said her “dying declaration said she was raped”.

India is one of the world’s most dangerous places for women with a rape occurring every 15 minutes, federal data shows. In December 2012, the gang rape of a 23-year-old woman sparked nationwide outrage and led to a tough new anti-rape law.

Public criticism mounted in recent days after the family of the latest victim said her body was cremated by police without their consent, an allegation officials deny.