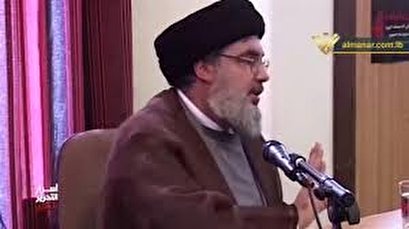 The documentary, aired by Lebanon’s Arabic-language al-Manar television network on Friday evening, shows Sayyed Hassan Nasrallah commanding his comrades to observe religious commitments and adequately protect civilian lives during their anti-terror offensive in the western Syrian city of al-Qusayr, located about 35 kilometers (22 miles) south of Homs, back in 2013.

Nasrallah said, “Hezbollah is characterized by the fact that fear runs ahead of it. The (al-Qusayr) battle is imperative and a game changer.”

He added, “I hope you would not forget to inform all brethren that we will be fighting for the sake of God. Taking religious abstinence into consideration is the key to success.

“If we come across a civilian [during the offensive], we have to protect them. We are fighting armed groups. Therefore, killing, harming, beating or injuring women, children and the elderly are religiously forbidden.

“Even though, we are religiously allowed to wipe out militants, we cannot seize locals’ properties,” Nasrallah underlined.

On June 5, 2013, Syrian government forces, backed by Hezbollah fighters, retook al-Qusayr from the Takfiri terrorists and liberated the strategic city.