Saturday, 03 October 2020 _French President Emmanuel Macron’s comments on the denunciation of Islam and in defense of secularism have drawn widespread backlash from Muslim activists and advocates of the noble religion. 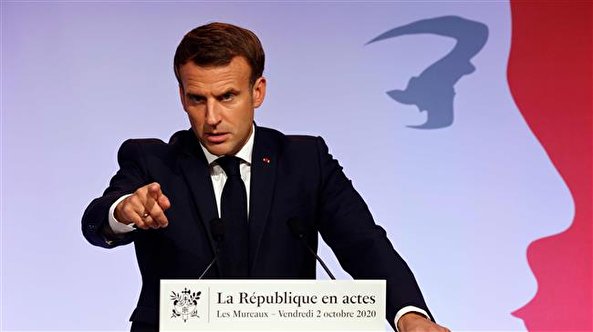 In a televised address on Friday, Macron unveiled a plan to defend France’s secular values against what he labeled as “Islamist radicalism” and claimed that the religion was “in crisis” all over the world.

Macron underlined that “no concessions” would be made in a new drive to eliminate religion from education and the public sector in the country.

The French president also said his government would present a bill in December that would strengthen the country’s 1905 law that officially separated religion and state.

Following the speech, activists took to Twitter to condemn the remarks.

Yasser Louati, a French Muslim activist, said in a tweet that “the repression of Muslims has been a threat, now it is a promise."

The repression of Muslims has been a threat, now it is a promise. In a one hour speech #Macron burried #laïcité, emboldened the far right, anti-Muslim leftists and threatened the lives of Muslim students by calling for drastic limits on home schooling despite a global pandemic.

Rim-Sarah Alaoune, a French academic, tweeted that his remarks are "so dumb."

President Macron described Islam as "a religion that is in crisis all over the world today". I don't even know what to say. This remark is so dumb (sorry it is) that it does not need any further analysis.

Macron no longer hiding his feelings about Islam. No longer radical Islam, now it’s just Islam that is the problem https://t.co/ljRK3LuNMM

Macron’s comments came less than a month after Muslim protesters censured Charlie Hebdo, a French weekly satirical magazine, for its recent reprinting of blasphemous caricatures of the Prophet Muhammad (PBUH).