Monday, 05 October 2020_White House physician Sean Conley says he has lied about Donald Trump’s health because he did not want to cause alarm amid uncertainty about the severity of the president’s status after he tested positive with the coronavirus. 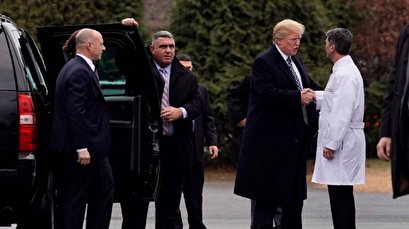 The 40-year-old Navy Cmdr., who once confided to his colleagues that he was laboring under intense personal stress in his job as a White House doctor, said he gave a rosy pronouncement of Trump’s state of health Saturday without revealing that the Republican president had been given supplemental oxygen or put on a steroid reserved for severely ill coronavirus patients.

On Sunday, however, he finally revealed those details, acknowledging that Trump’s oxygen level had dropped at one point, according to The Washington Post.

“I was trying to reflect the upbeat attitude that the team, the president, over his course of illness, has had,” Conley said. “I didn’t want to give any information that might steer the course of illness in another direction. And in doing so, you know, it came off that we were trying to hide something, which wasn’t necessarily true. . . . The fact of the matter is that he’s doing really well.”

However, long before Trump contracted the virus especially lethal to the elderly, some of Conley’s former co-workers said they were bitterly disappointed at what they regard as his lack of independence from White House politics.

“Every statement he is giving appears to be political, dictated by the White House or the president,” said one person who has worked with him.

“These are not the statements a medical doctor gives,” added the person, who was speaking on the condition of anonymity.

White House spokesman Judd Deere said in a statement that “the fact that this publication has chosen to write a hit piece on the President’s physician, who is an officer in the US Navy, at this critical time is outright disgusting and irresponsible.”