Tuesday, 06 October 2020_US President Donald Trump has left the Walter Reed National Military Medical Center after spending three days there for treatment of the coronavirus. 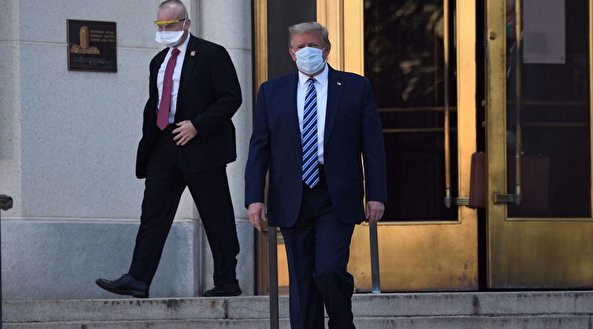 Now with mask off, Trump stands on White House balcony to watch Marine One depart pic.twitter.com/WnTSP3UEgc

The patient walked out of the hospital just after 6:30 pm on Monday evening, while ignoring questions from the reporters.

“Though he may not entirely be out of the woods yet, the team and I agree that all of our evaluations, and most importantly, his clinical status, support the president’s safe return home,” White House physician Sean Conley told reporters during a briefing outside the hospital in Bethesda, Maryland earlier in the day.

With some four weeks to go until the November 3 presidential election, Trump also said shortly before leaving that he would be on the campaign trail "soon."

“Don’t be afraid of covid. Don’t let it dominate your life. We have developed, under the Trump Administration, some really great drugs & knowledge. I feel better than I did 20 years ago!” the president wrote on Twitter.

The president has so far received supplemental oxygen on two occasions, in which he experienced transient drops in his oxygen levels.

Meanwhile, Health and Human Services Secretary Alex Azar and Scott Atlas, an adviser to Trump, held a meeting with a group of doctors who are proponents of the controversial “herd immunity” approach to the pandemic.