Tuesday, 06 October 2020_Iran’s UN ambassador has censured the misuse of the Chemical Weapons Convention (CWC) and the Security Council to bring groundless charges against Syria, warning that such an “unproductive” approach will damage the credibility of the world body. 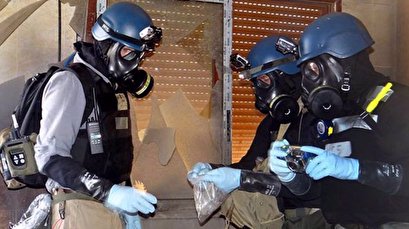 Speaking during a Security Council meeting on Syria and chemical weapons on Monday, Majid Takht-Ravanchi said the Organization for the Prohibition of Chemical Weapons (OPCW), the UN’s chemical watchdog, had confirmed the destruction of Syria’s entire chemical stockpile and its 27 production facilities.

However, this fact and the Syrian government’s significant cooperation with the OPCW and the United Nations, including the submission of more than 80 monthly reports and other information, are being ignored, he added.

Takht-Ravanchi also stressed that such “unproductive policies” will not contribute to the resolution of the outstanding questions, but it has rather “divided this Council, eroded the OPCW’s credibility and weakened professionalism and consensual decision-making process in that Organization.”

Reiterating Iran’s call for the “balanced, full and non-discriminatory implementation of the CWC,” the envoy said, “In the past several years, based on unsubstantiated allegations, the processes of the CWC, OPCW and the Security Council have been abused against the Syrian government.”

Syria surrendered its entire chemical stockpile in 2013 to a mission led by the United Nations and the OPCW.

However, Western countries have repeatedly accused the government of President Bashar al-Assad of conducting chemical attacks in Syria.

Damascus has categorically rejected the accusations, saying the attacks had been staged by foreign intelligence agencies to pressure the government in the face of army advances against militants.

It has also specifically pointed to the role of the White Helmets, a group which claims to be a humanitarian NGO but has long been accused of working with anti-Damascus militants and staging false-flag gas attacks.