Wednesday, 07 October 2020 (YJC)_ The foreign ministry dismissed as "untrue" a Japanese news report that South Korea sought to arrange a visit to the United States by North Korean leader. 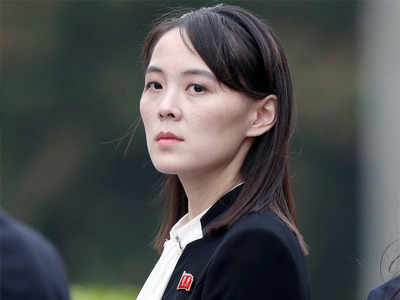 The foreign ministry on Wednesday dismissed as "untrue" a Japanese news report that South Korea sought to arrange a visit to the United States by North Korean leader Kim Jong-un's sister before the US presidential election in November.

Citing sources from South Korea, the US and Japan, the Yomiuri Shimbun newspaper reported that Seoul had planned to arrange high-level talks between Kim Yo-jong and senior Washington officials before the Nov. 3 vote.

Seoul had initially hoped for another summit between US.

President Donald Trump and North Korean leader Kim Jong-un in a "top-down" approach to addressing the North's nuclear quandary, but it later sought the visit by Kim's sister out of concern that another no-deal summit like the one in Hanoi in February last year could hurt the leader's authority, the report said.

Referring to the article, a foreign ministry official in Seoul said tersely that it was "untrue."

The newspaper painted a "despairing" outlook for the "October surprise" due to US President Donald Trump's COVID-19 diagnosis and US Secretary of State Mike Pompeo's decision to postpone his trip to Seoul originally set for this week.

The report also cited sources' view that the National Intelligence Service's assessment in August that the North Korean leader has delegated some of his authority to his top aides, such as his sister, might be part of the spadework to set the mood for her trip to the US.

It also pointed out that Kim Yo-jong's request in July for a DVD of US Independence Day celebrations was seen as a sign related to her possible visit to the US.