Wednesday, 07 October 2020_United States Secretary of State Mike Pompeo has blasted what he referred to as China’s “exploitation,” prompting Chinese officials to tell the US top diplomat to drop his “Cold War” mentality. 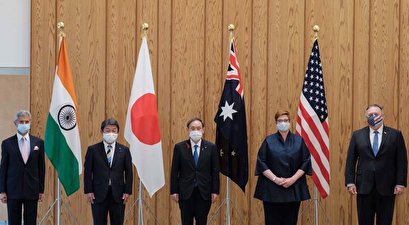 At a “Quad” Indo-Pacific meeting in Japan’s capital city, Tokyo, on Tuesday, the top US diplomat urged Japan, India, and Australia to team up with the US to create a formalized military alliance and a united front against China. The Quadrilateral Security Dialogue, or Quad, is an informal strategic forum involving the United States, Japan, Australia, and India.

“[I]t is more critical now than ever that we collaborate to protect our people and partners from the CCP’s exploitation,” Pompeo said, referring to China’s Communist Party.

He said Washington sought to stop China’s influence “in the South and East China Seas, the Mekong, the Himalayas, the Taiwan Strait.”

Pompeo urged Washington’s Southeast Asian allies to formalize and potentially strengthen the Quad alliance. “Once we’ve institutionalized what we’re doing — the four of us together — we can begin to build out a true security framework,” he said.

In an interview with Japanese public broadcaster NHK, Pompeo insisted that it was important that the Quad have a “shared picture” of what he called the challenge they faced against China.

The strong anti-Beijing rhetoric by the US’s top diplomat comes amid high tensions between the US and China.