South Korea calls for US support in ending Korean War 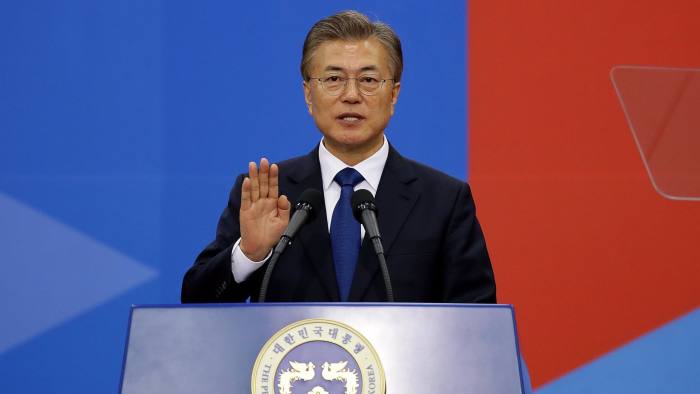 President Moon Jae-in on Thursday again called for the formal declaration of the end of the Korean War, urging the US to support the move.

In a prerecorded speech to the Annual Gala Dinner of the Korea Society – a New York-based nonprofit organization that promotes Korea-US ties – Moon said that declaring the end of the war will be the first step in establishing permanent peace on the Korean Peninsula.

Saying that progress made at inter-Korean and US-North Korea summits in 2018 and 2019 cannot be allowed to be lost, Moon called for Seoul and Washington to work together to achieve the goal.

“When we not only deter war but also actively create and institutionalize peace, our alliance will be even greater.”

Saying that declaring the end of the war will enable the two Koreas to “advance into an era of reconciliation and prosperity,” Moon went on to say that Seoul and Washington will continue to cooperate closely to engage and to “build trust with North Korea.”

Moon renewed calls for declaring an end to the Korean War at last month’s UN General Assembly, in an apparent attempt to appease Pyongyang, which maintains that it has received nothing in return for its denuclearization efforts.

Citing Korea-US cooperation in responding to the COVID-19 pandemic, such as the two countries not closing borders to each other and Korea shipping test kits to the US, Moon went on to say that the Korea-US alliance is evolving beyond Northeast Asia.

“The ROK-US alliance is now in a new evolutionary phase with the two countries addressing not only regional but also global issues together,” Moon said, referring to the country’s official name, Republic of Korea.

“By going beyond traditional security, economic, social and cultural cooperation and jointly responding to transboundary crises such as infectious diseases, terrorism and climate change, we are broadening the scope of our cooperation to form a comprehensive alliance.”