Thursday, 08 October 2020_Russia has placed Belarus opposition leader Svetlana Tikhanovskaya on its wanted list on “a criminal charge” stemming from her public calls to harm the country’s security. 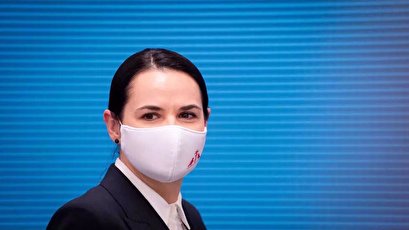 Belarus has been in turmoil since President Alexander Lukashenko won the August 9 presidential election, with the opposition rejecting the official results and alleging voter fraud. The United States and the European Union (EU) have repeated the allegation, rejecting Lukashenko’s re-election.

After the vote, 38-year-old Tikhanovskaya called for massive rallies across Belarus against the government and soon took refuge in Lithuania, citing alleged pressure from the authorities.

From Lithuania, she still urges her people to continue their rallies against the incumbent president, who was sworn in as president for a sixth term last month.

The Russian interior ministry said in a statement Wednesday that Tikhanovskaya was “wanted on a criminal charge,” without providing further details.

The opposition faces a charge in Belarus of making public calls to harm the country’s security, including calls to seize power, according to the Russian state news agency RIA Novosti.

Russia and Belarus are partially integrated under a union-state agreement.

Lukashenko has said Tikhanovskaya and her supporters are Western “puppets” who are trying to overthrow him, stressing that Western governments are seeking to destabilize the ex-Soviet state.

The EU has already imposed punitive sanctions against 40 Belarus officials, but not Lukashenko himself, over what they call the “fraudulent” election.

In reaction to the EU sanctions, Minsk has drawn up a list of European officials banned from entering Belarus, but it has not identified the individuals on the sanctions list. Lukashenko has already said that Minsk does not need the EU’s recognition.