Saturday, 10 October 2020_US President Donald Trump claims Iran will sign a new nuclear deal with Washington within one month if he wins the November 3rd election. 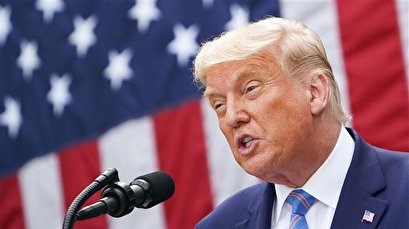 “If I win, we’ll have a great deal with Iran within one month,” Trump said on Friday during a two-hour phone conversation with conservative radio host Rush Limbaugh.

The outspoken US president also issued a threat against Iran, saying the country will pay one-thousand-times if it does anything against the US.

“I hate to say it on an important show like this, but I’ll say it, you don’t see the terror the way you used to see the terror. And they know if they do anything against us, they’ll pay 1,000-fold,” he said.

In his earlier remarks, Trump also uttered a profanity against the Islamic Republic. He said, “Iran knows that and they’ve been put on notice: … if you do something bad to us, we are going to do things to you that have never been done before.”

Tensions between Washington and Tehran flared in 2018 when Trump withdrew the US from the JCPOA (the 2015 nuclear deal, known as the Joint Comprehensive Plan of Action).

In August, Trump claimed Iranians will come to the US and sign a new nuclear agreement within up to a month of his reelection.

Back then, Iranian Foreign Minister Mohammad Javad Zarif said the country will not hesitate to negotiate, but will never renegotiate a done deal.

Iran never hesitates to engage in negotiations, but will not renegotiate an issue that it has already concluded through negotiations, Zarif said in a clear allusion to frequent calls by Trump, who has been insisting that Iran should give up the 2015 nuclear deal it clinched under Trump's predecessor with six world powers, and conclude a new agreement with the current administration in the United States.

Tehran has said that it will talk with the US only within the framework of the 2015 nuclear deal.

In May 2018, however, Trump unilaterally pulled his country out of the deal and later re-imposed the sanctions that the deal had lifted. Washington’s intransigence flew in the face of the fact that the accord has been ratified by the United Nations Security Council in the form of its Resolution 2231.

Ever since, the US has also been threatening other countries into toeing its sanction line and abandoning their legal trade with Iran.

Zarif has said in his article that as a result of Washington’s behavior, Iran has been the target of “the most vicious and indiscriminate sanctions.”