Tehran hits back at Trump over outburst of profanity: Iranians not intimidated

Saturday, 10 October 2020_Iran has hit back at US President Donald Trump after he went on expletive-ridden rant while once again threatening the Islamic Republic. 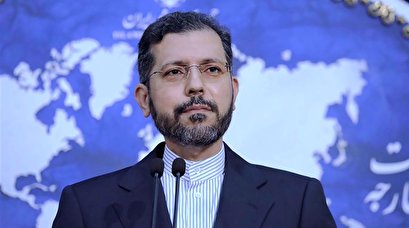 Speaking during a two-hour phone conversation with conservative radio host Rush Limbaugh on Friday, Trump said, “Iran knows that, and they’ve been put on notice: If you f--- around with us, if you do something bad to us, we are gonna do things to you that have never been done before.”

The profanity was censored on the slightly delayed radio broadcast, but was captured on Limbaugh's livestream and memorialized in a transcript on his website.

Iran Foreign Ministry spokesman Saeed Khatibzadeh responded to Trump, tweeting that the Iranians would not be intimidated and would rather “choose response to US crimes,” including illegal sanctions and the January assassination of top anti-terror commander Lieutenant General Qassem Soleimani in Iraq.

The Iranian people aren't intimidated by the bullying rhetoric of the failing & lawless US regime.

Our people leave no stone unturned in defending Iran's dignity. WE will choose response to US crimes—incl sadistic sanctions & criminal assassination of ISIS #1 enemy Gen Soleimani

Trump is no 'tough guy'

The spokesperson for Iran's permanent mission to the United Nations dismissed the US president’s words as electioneering.

"Mr. Trump's attempt to portray himself as a tough guy is unsurprising as the Presidential election in America is fast approaching," Alireza Miryousefi told the American weekly Newsweek.

He also noted that Iran would not back down in the face of Trump’s remarks, nor by his administration decision to double down on sanctions or even actions like General Soleimani’s assassination.

"The US is waging a cruel and illegal economic war, tantamount to economic terrorism, on the people of Iran," Miryousefi said. "The US also cowardly assassinated General Soleimani, a hero in the fight against Daesh and other terrorists, while he was the official guest of the Iraqi government on a peace mission."

"The people of Iran have proven to be resilient and not intimidated by such inappropriate, irresponsible and empty rhetoric," he added.