Sunday, 11 October 2020 _A new book has revealed that the US military has contaminated the Pacific Ocean with radioactive waste and weapons-grade chemicals for decades. 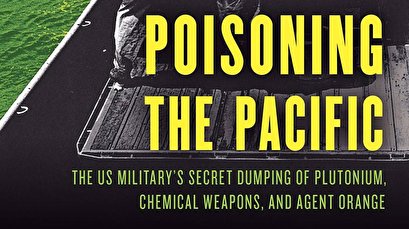 The new book titled Poisoning the Pacific, written by British journalist Jon Mitchell, details how the US military has been disposing toxic substances, including plutonium, dioxin, and VX nerve agent at the Pacific.

Based on more than 12,000 pages of US government documents, Poisoning the Pacific narrates the story of soldiers, their families, and residents who have been exposed to poisonous substances.

The documents have been obtained under the US Freedom of Information Act (FOIA) and through interviews with local residents, military veterans and researchers.

The US government, however, has covered up the extent of the damage and refused to help the victims.

In one case, Leroy Foster - a US Air Force master sergeant who was assigned to the Anderson Air Force Base in Guam in 1968 – was ordered to mix “diesel fuel with Agent Orange” and spray “it by truck all over the base to kill the jungle overgrowth.”

Soon after, Foster suffered serious skin complaints and eventually fell sick with Parkinson’s and ischemic heart disease. Later, his teenage daughter had cancer, and his grandchild was born with 12 fingers, 12 toes, and a heart murmur. Foster died in 2018.

“My reporting has helped these sick men and women to receive compensation from the US government. Investigative journalism is ultimately a job that ought to help people suffering from mistreatment to receive the justice they deserve,” Mitchell says in his book.