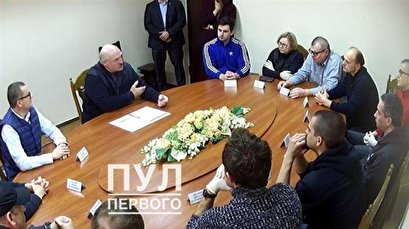 In a photo published by Lukashenko's press service, the Belarusian leader and 11 casually-dressed opposition members are seen sitting at a round table decorated with flowers in a pre-trial detention center in Minsk.

Among the detained political figures seen in the picture are Viktor Babaryko, a banker that was one of Lukashenko's rivals in August elections, Liliya Vlasova, a lawyer who is a member of the opposition's coordination council set up to ensure a peaceful transfer of power, and Vitali Shkliarov, a Belarusian-US strategist and advisor.

Belta news agency said Lukashenko spoke about his proposed changes to the Belarusian constitution at the meeting and discussed ways to settle political disputes.

"A constitution cannot be written in the street," the agency quoted the president as saying, adding that the country lives under the motto "dialogue now!"

"We should not get fixated on the constitution. I am open-minded and try to convince not only your supporters, but entire society that a broader look should be taken at the problem," Lukashenko said.

"The president’s goal is to listen to everybody’s opinion,” Belta news agency quoted Lukashenko as saying in the meeting, adding that the participants agreed to keep "secret" the content of the four-and-a-half-hour conversation.

Lukashenko’s visit has widely been praised as the beginning of dialogue with the opposition, which has called for the return to the 1994 constitution to limit the number of presidential terms and holding a new election.