Monday, 12 October 2020 _Fresh fighting has been reported between Azerbaijan and Armenian-backed forces in and around the disputed South Caucasus region of Nagorno-Karabakh, with both sides accusing each other of violating a humanitarian ceasefire that came into force two days ago to put the plug on 25 days of fighting in the region. 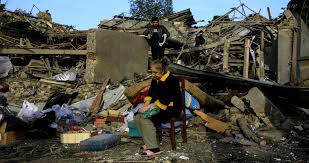 Overnight clashes continued into Monday morning, according to reports which said the sounds of shelling were heard in Karabakh's main city of Stepanakert.

Reports said Armenia backed-forces attacked the Azeri town of Barda, not far from the front line, on Monday.

The Azerbaijani Defense Ministry said Armenian forces were not complying with the Russian-brokered ceasefire that came into force after two weeks of fighting on Saturday.

The agreement to pause hostilities in order to exchange prisoners and the bodies of people killed was approved by Armenian and Azerbaijani foreign ministers in marathon talks in Moscow on Friday.

The talks were the first diplomatic contact between the two former Soviet republics since the recent fighting over the mountain enclave broke out late in September.

About 500 people have been reported killed since then.

Azerbaijan's Defense Ministry said on Monday, "Armenian armed forces, which did not comply with the humanitarian truce, repeatedly tried to attack the positions of the Azerbaijan army.”