Tuesday, 13 October 2020_Donald Trump's boasting he is immune to coronavirus. And then some of Joe Biden's assertions challenging people to arm wrestle and name-calling, just highlights the absolute devolution of American politics and out of 340 or 350 million people that live in the United States, Donald Trump, and Joe Biden at 74 and 78 was the best that our political system could come up with just only reaffirms my prior declarations that American political system is designed to prevent change. 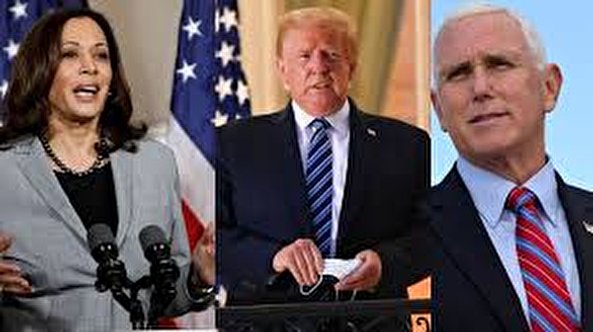 A president who has no medical training whatsoever should not be making medical pronouncements.

The hallmarks of a good leader are to surround himself with people or herself with people that are smarter than them. And Donald Trump just steadfastly refuses to do that. In fact in the few occasions when he has had competent people that are very intelligent and articulate, he fires them. And instead has created a cabinet and staff of sycophants and groupies. And he's paid the price.

Also, my heart breaks for a lot of his supporters who have been infected by the coronavirus. Some of them have died after having large rallies and making very foolish pronouncements that the coronavirus is a hoax and that masks don't protect anybody. And yet, a lot of leaders of these splinter groups and protests have themselves contracted the disease and died.

We have seen a tragedy in the United States. It is just absolutely unimaginable probably to our past leaders, and to the founders of the country. There have been cases of people being re-infected with the coronavirus, so I don't know where this thing of immunity is coming from On the part of Trump. It is clearly a political statement designed to reassure his political base that he remains the machismo, the tough guy, who does not want to admit any defects or issues in which he was wrong, and is still encouraging people to be rather reckless.

We have super spreader events taking place all over the United States, and even his own supporters have begun to question his credibility on the issue of masks and whether or not the virus is a hoax.

So I consider Trump's pronouncements to be purely political. They run contrary to science, and to health.

And in the totality of the 2020 election, it's a sad, sad state of affairs that we have a 74-year-old and a 78-year-old. The 78-year-old, Mr. Biden, clearly has mental fatigue if not deteriorated mental faculties, and President Trump who is obese, who conceals his medical conditions.

So who knows what's going on with President Trump?

In any case, the American voters should be looking strongly at the vice-presidential candidates because whoever wins, whether it's Donald Trump or Joe Biden, there is probably a higher likelihood now the United States has a vice president elevating to the presidency than any time in US history.