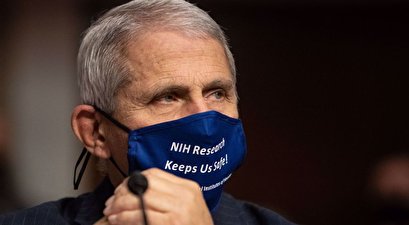 Trump had attacked Fauci before, saying the top immunologist  "made a lot of mistakes" and “I disagree with him."

In a tweet on Tuesday morning, Trump wrote that Fauci's pitching arm -- a reference to his poor first pitch at Nationals Park on Major League Baseball’s Opening Day in July -- was "far more accurate than his prognostications."

Trump on Tuesday also referenced Fauci's advice given early in the pandemic against wearing masks. That decision was due largely to a nationwide shortage of masks.

Fauci, for his part, in many television appearances has openly questioned some of Trump's inaccurate claims.

The longtime director of the National Institute of Allergy and Infectious Diseases, earlier this week, slammed the Trump reelection campaign for using his words out of context in a campaign ad touting Trump's handling the coronavirus crisis.

Fauci said in a statement on Sunday when asked if he agreed to be featured in Trump's reelection ad that during his five-decade career he had "never publicly endorsed any political candidate. The comments attributed to me without my permission in the GOP campaign ad were taken out of context from a broad statement I made months ago about the efforts of federal public health officials."