Tuesday, 13 October 2020_The naval forces of Iran’s Army and Islamic Revolution Guards Corps (IRGC) have formed a strong “defense chain” from the north of the Persian Gulf to the Northern Indian Ocean, which stands ready to respond to any threat and act of aggression against the country, a senior commander says. 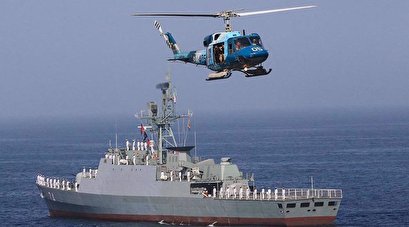 “We are telling the enemies that we will give a response to any threat against our country’s waters and interests,” Iran’s Deputy Navy Commander for Coordination Rear Admiral Hamzeh Ali Kaviani said on Tuesday during a ceremony to welcome the 69th fleet of warships at the southern Iranian port city of Bandar Abbas.

He added that the country’s naval forces would continue to maintain a powerful and constant presence in the high seas to safeguard national interests free from reliance on other countries.

“One of the notable features of this fleet of warships is the mighty return of the entirely Iran-made destroyer, Sahand, [to the country] which berthed at Bandar Abbas port after nearly 70 days of voyage,” Kaviani said.

He emphasized that Sahand’s successful return was a strong response to those who claimed that Iran lacks the capability to build destroyers.

The commander said the Iranian naval forces’ capabilities are well beyond constructing destroyers.