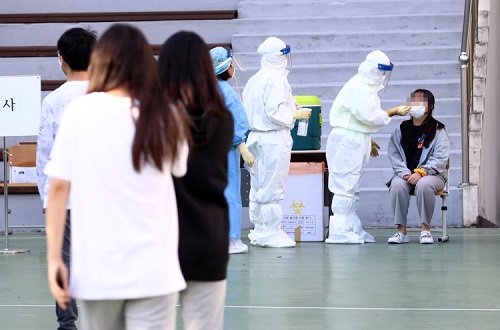 South Korea's new coronavirus cases rebounded to over 100 on Thursday mainly due to a new cluster infection in the southeastern port city of Busan amid an eased social distancing scheme.

The country added 110 COVID-19 cases, including 95 local infections, raising the total caseload to 24,988, with the death toll reaching 439, according to the Korea Disease Control and Prevention Agency (KDCA).

The number of new daily local infections is a sharp hike from 53 a day earlier and also surpassed the 50 mark, one of the country's barometers for the lowest level of its social distancing scheme.

"The number of new (local) infections has stayed in the 60s over the past week, yet the number spiked to over 90 today due to the cluster infection case from a nursing facility in Busan,"

The health authorities earlier said they plan to conduct COVID-19 tests on all patients and people working at nursing facilities and mental institutions in the greater Seoul area.

The country earlier suffered a major uptick in virus cases in mid-August, mostly traced to a conservative church in northern Seoul. After reaching 103 on Aug. 13, the figure shot up to 441 on Aug. 27. The figures stayed in the triple digits until reaching 82 on Sept. 20.

One of the infected patients has already died.

The KDCA said the number of daily new imported cases reached 15, sharply down from 31 on Wednesday and 33 on Tuesday.

The number of patients in serious or critical condition came to 82, down three from the previous day.

The total number of people released from quarantine after making full recoveries stood at 23,082, up 52 from the previous day.