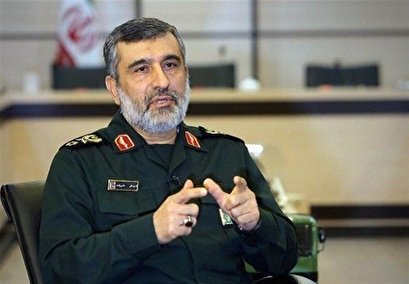 Speaking on the sidelines of an exhibition of the IRGC’s military achievements in Tehran on Thursday, Brigadier General Hajizadeh highlighted the importance of reliance on domestic capacities to overcome the difficulties imposed by the enemy.

This exhibition is yet another proof that reliance on youths, elites and indigenous capacities could upgrade Iran’s international standing and help the country achieve self-reliance in many areas such as defense amid sanctions and pressures, he added.

Back in April 2016, Leader of the Islamic Revolution Ayatollah Seyed Ali Khamenei referred to the United States and some other Western countries as unreliable sides, and called on Iranian authorities to rely not on the West but on domestic capacities and capabilities.

The US, and some other Western countries, cannot be trusted, the Leader said, stressing that the stances and moves of US officials confirm this.

“Therefore, we should rely on our own capabilities,” Ayatollah Khamenei said, reiterating that the abundant local capacities and capabilities should be tapped to resolve the country’s problems.

Share to
Related News
The representative of Iran: International community must unite against US unilateralism
Tags
IRGC Cmdr ، Aerospace ، Hajizadeh
Your Comment