Leaders of the European Union (EU) member states have reaffirmed their support for Greece and Cyprus against the “unilateral and provocative actions” of Turkey in the eastern Mediterranean Sea. 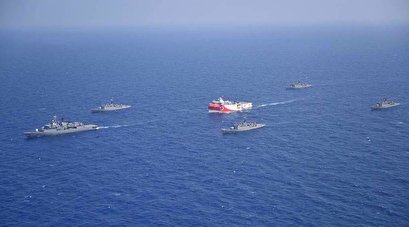 The EU “deplores renewed unilateral and provocative actions by Turkey in the eastern Mediterranean, including recent exploratory activities,” the leaders said in a communique after a summit in Brussels on Friday.

They also called on Ankara to reverse its actions and reiterated their “full solidarity” with bloc members Greece and Cyprus.

Turkey has been involved in a dispute with Greece and Cyprus over oil and gas exploration rights in the eastern Mediterranean for months. Tensions first heightened in August when Turkey sent a seismic research vessel to prospect for energy in the region. The ship was withdrawn temporarily, but was sent back on Wednesday, reigniting the tensions.

The EU has previously threatened to impose sanctions on Turkey over the activities in the disputed waters.

European Council President Charles Michel stressed on Friday that the bloc would decide about possible sanctions on Ankara in another summit in December.

“We plan a summit in December. And we have planned, indeed, to tackle again and to assess the situation in the eastern Mediterranean and in Turkey,” he said at a press conference after the Friday summit.

German Chancellor Angela Merkel said that Turkey’s actions in the region were provocative and regrettable.

“We are keen to continue along the path we have taken with Turkey,” Merkel told reporters. “The further development of EU-Turkey relations is in the interest of both sides.”

Turkey has been attempting for years to become a member of the EU itself.

French President Emmanuel Macron said after the summit that the EU was open to negotiations with Turkey in the Mediterranean dispute, but he warned the bloc “will not concede anything to these provocations.”