Saturday, 17 October 2020_US Republican mega-donor and hardline Zionist Sheldon Adelson and his wife, Miriam, have poured a whopping $75 million into a super PAC to help President Donald Trump get reelected in November, according to reports. 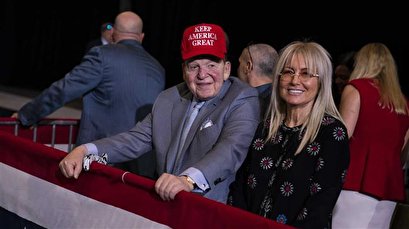 The couple's donations to Preserve America PAC, delivered in several installments in August and September, accounting for nearly 90 percent of the group’s fundraising in September, POLITICO reported.

The Adelsons have so far donated $176 million to Republican candidates and committees for the 2020 election cycle, according to FEC data.

Preserve America raised a total of $83.76 million between its creation on August 31 and the end of September. Home Depot co-founder Bernard Marcus contributed $5 million to it, and Wisconsin roofing magnate Diane Hendricks gave $1 million.

The group has spent heavily on Trump's behalf in key battleground states that is aimed at providing last-minute help to Trump against his Democratic rival, Joe Biden.