Ex-president Morales: US trying to block my return to Bolivia

Saturday, 17 October 2020_Former Bolivian President Evo Morales, who is living under asylum in Argentina, says the United States and its allies are making efforts to prevent his return in defiance of calls at home for him to seize power. 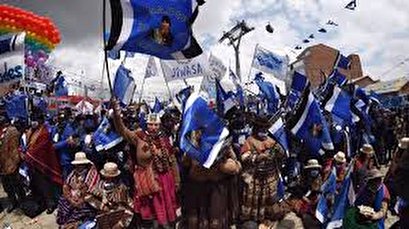 Morales made the remarks in an interview with Iran’s Hispan TV Spanish-language television network on Friday.

“The US is trying so that I won’t return. We seek freedom, which is the goal of the people…. Our intention is to liberate Bolivia in terms of political, cultural, social and even economic ideology. As the government and people, we want to take an important step and move towards industrialization after nationalization, but they (the Americans) do not like this,” he said.

The ex-president also criticized interim Interior Minister Arturo Murillo for travelling to the US last month to buy weapons for allegedly preserving democracy in the Latin American state.

"Weapons for democracy?! How it will be possible? It will make people aware of where these weapons came from! Losing a country's freedom, democracy and international law is like losing that country's natural resources,” he added.

Morales further condemned as “racist and discriminatory” a statement by interim President Jeanne Anez, who called for obstructing the return of what she called savages to Bolivia.

Expressing dismay at Anez’s “colonial mentality,” he noted, “The people are united against these comments. They have shown in gatherings, rallies and etc. that they are stronger and more vigilant than ever and that they are aware of our endeavors to rebuild democracy and peace.”

Morales, Bolivia’s first Indigenous president, held office for 14 years and ushered in an era of unprecedented stability and growth in the South American country.

He was seeking to nationalize the extraction of Bolivia’s lithium reserves, but was forced to resign last November under pressure from the military and following the opposition’s challenging the victory that he had secured in presidential election a month earlier.

The former president, who believes that he was the victim of an orchestrated coup, sought exile in Mexico back then and is currently residing in Argentina.