Saturday, 17 October 2020_South African white farmers and black protesters have exchanged threats and abuses during a court hearing for a murder case that revealed persisting racial tensions in the country 26 years after the segregationist apartheid regime ended. 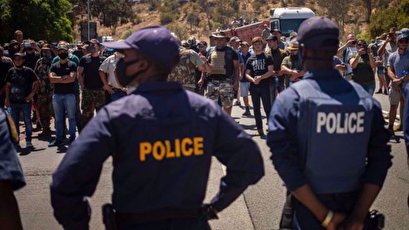 The Friday confrontation followed the murder of Brendan Horner -- a white farmer killed earlier this month at his farm in Free State province – triggering riots and prompting President Cyril Ramaphosa to call on South Africans to “resist attempts ... to mobilize communities along racial lines.”

As the protesting farmers outside the courthouse in the town of Senekal blamed the government for failing to protect them from violent crimes, counter-protesters from the Economic Freedom Fighters (EFF) cried out against what they regard as the persisting domination of South Africa’s economy by whites while many black South Africans remain as poor as they did under brutal apartheid regime.

EFF leader Julius Malema attended the Friday court hearing during which the two murder suspects filed a request for bail, and addressed thousands of protesters outside the courthouse.

Malema told protesters that they should not be “confused by the so-called farm murders,” reminding them that many more black South Africans were also victims of violent crime.

“Those are the ones who deserve our sympathy, not the old, white racists,” he emphasized.“We don’t want to kill (the) white man. We want equality.”

A protester and EFF supporter from Soweto, Khaya Langile, also said, “I’m here because of white people ... taking advantage of us.”

Murders of white farmers make up a small fraction of total homicide cases in South Africa, which has the world’s fifth highest murder rate. There were 21,325 murders across the country during the 2019-20 fiscal year, of which only 49 were white farmers, according to official police figures.